Five California teachers have filed a class action lawsuit against the California Teachers Association alleging the union and government officials violated their First Amendment rights by continuing to deduct union dues from their wages over their repeatedly stated objections, and without first obtaining clear consent and a knowing waiver of their First Amendment right to be free from compelled speech through union participation.

In addition to the CTA, the suit names multiple other parties, including several school districts and government officials.

Last June, the Supreme Court case Janus v. AFSCME, ruled that public-sector workers cannot be compelled to financially support a union as a condition of employment without a showing that the employee provided “clear” and “affirmative” consent for union dues deductions.

This also meant that teachers unions could no longer compel nonmembers to pay representation fees. Yet that is exactly what the California Teachers Association, the National Education Association, local union affiliates, and the California Attorney General did.

“The teachers claim the union never informed them of the rights recognized in Janus, instead implying union dues or agency fees were still required, and that the paperwork — which included language purportedly making dues payments irrevocable — was simply routine,” the Freedom Foundation said.

“It’s one thing to have a good Supreme Court decision; it’s another to have it enforced,” said Lance Izumi, Director of Education at the Pacific Research Institute. “The people who are meant to be protected are not unless this decision is enforced.”

Attorney Harmeet Dhillon said in an interview that this lawsuit seeks to end the illegal dues deductions – including recent State laws that authorize and compel them, as Senate Bill 204 and Assembly Bill 119 do, two budget “trailer” bills which never received public hearings — and to clarify the type of prior consent necessary going forward, before unions deduct dues from teachers’ wages. Gov. Jerry Brown signed the budget trailer bills in 2018 to give public employee unions legal cover from employee lawsuits demanding that they repay union dues and fees to public employees, that the Supreme Court determined were unconstitutional in the Janus case.

Dhillon’s client, Bethany Mendez, a public school teacher of special needs children with the Fremont Unified School District said just prior to the June 27, 2018 Janus decision, the Fremont Unified District Teachers Association operatives pressured her to join the union without informing her of her constitutional rights. “There are many options available to teachers, but unions are not telling us what these are,” Mendez said. “At the end of the school year, the union rushed and put pressure to get signatures from teachers before the passing of the Janus case. Many signed not knowing they could opt out.” Mendez said the Fremont teachers association takes $1,500 out of her pay check annually. “In the Bay Area, there is a very high cost of living,” Mendez said, adding that most teachers could use the money to live on.

“Unions use dues for political positions which these teachers disagree with,” Dhillon said at a press conference. “The Court puts the burden on unions to demonstrate through ‘clear and compelling evidence’ that an employee waived her right not to financially support a union. Despite this, the Unions’ membership forms contain no language that would enable clear, prior, informed consent. This lawsuit seeks to end these deductions.”

Immediately after the Janus decision came down, California Atty. Gen. Xavier Becerra filed a friend-of-the-court brief to support mandatory union fees for public employees, in opposition to the Janus case decision. Becerra argued that the current collective bargaining system helps resolve personnel issues, and avoids inefficiency and disruption in the workplace, the Los Angeles Times reported. “Everyone who benefits from representation should share the cost,” Becerra said. “The fees at issue … play an integral role in supporting state workplaces all across the country.”

“These teachers want the choice,” Dhillon said. “Many don’t even agree with the collective bargaining decisions of the unions about classroom size and other issues.”

Interestingly, Dhillon said federal unions do not have this required union membership, “and they are doing just fine,” Dhillon added. 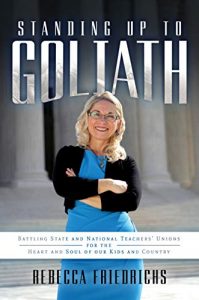 Rebecca Friedrichs knows a thing or two about suing the CTA.

Friedrichs, a teacher, took her lawsuit against the CTA all the way to the Supreme Court in Friedrichs v. California Teachers Association. Her case was also over forced membership in public sector unions.  Friedrichs, the author of Standing Up to Goliath: Battling State and National Teachers’ Unions for the Heart and Soul of Our Kids and Country, paved the way for the Janus win when her case was forced to live with a lower court ruling upon the surprise death of Justice Antonin Scalia, who was the swing vote.

When we talked Monday about Dhillon’s case Friedrichs was excited. ‘I’m proud of Bethany Mendez,” Friedrichs said. “From the minute my case came, the unions started directing the ‘fixes’ — ‘the Friedrichs fixes’ — state by state, just as California did before the Janus decision.”

Since the Janus ruling, public employees filed numerous lawsuits around California and the country demanding that unions return dues and fees to them. In many of the cases, the employees claimed – as Mendez did – that unions misled them about membership options and strong-armed them into paying full “irrevocable” dues.

In her book, Friedrichs tells the story of now-90-year-old Ruth Finnegan who started teaching in 1949. In 1968, Finnegan started teaching in Hershey, Pennsylvania and was hounded and harassed daily by five union officials “in black suits” to join the union. She didn’t want to join, and the union officials never convinced her they were offering her any service for her membership. However, they continued to harass her, even showing up twice to her classroom after hours when she was working late, when she was alone. Friedrichs said Ruth Finnegan was harassed and intimidated daily, with the union even threatening to sue her. They kept trying to force her to sign their union agreement. She eventually felt she had no other choice than to sign their papers.

“America’s teachers, parents, and kids deserve better,” Rebecca wrote in her book. “If we want freedom, we’re going to have to fight for it.”

“I’m really proud of this teacher,” she said again about Bethany Mendez.