Ah Twitter, you fickle mistress. Just when one is ready to delete this godless, nasty, disinformation-spewing, Covid-alarmist, CCP mouthpiece and dissent-intolerant force for evil, something of value appears.

That arrived in the form of a perfect thread from Eddie Zipperer, an accomplished playwright who also teaches political science at Georgia Military College. In a 10-part thread, he made a point that California Globe actually made early this summer—that Jan 6 was of intense interest to media and Twitter but not to voters. But Zipperer made it more clearly, then powerfully supported it with persuasive evidence, mainly in the form of a massive poll of 2,010 registered voters conducted by Democratic pollster Mark Penn and Stephen Ansolabehere, the polling director at Harvard University.

It’s the most affirming of journalism experiences, when a well-crafted, scientifically, valid survey, produces data that confirm your hypothesis, but also new information that surprises and forces you to rethink previous assumptions.

In our story in June, California Globe previously cited a CBS poll that asked American voters to rank 10 issues. “Inflation scored the highest, with 82% of respondents calling it a high priority and 3% a low priority. Economy was just behind, with an 80-2 ratio. The least important issue, by far, was ‘Investigating January 6th.’ The tally of 33% high priority and 40% low was striking because that means even registered Democrats and Democrat leaners, who together typically comprise about 40% of these polls, do not consider Jan 6 a high priority.” Remember, this was way back in June, before measures to drag inflation under 8% had failed, and before the J6 committee’s last-minute stunt to unconstitutionally drag in the former leader of a co-equal branch of government. 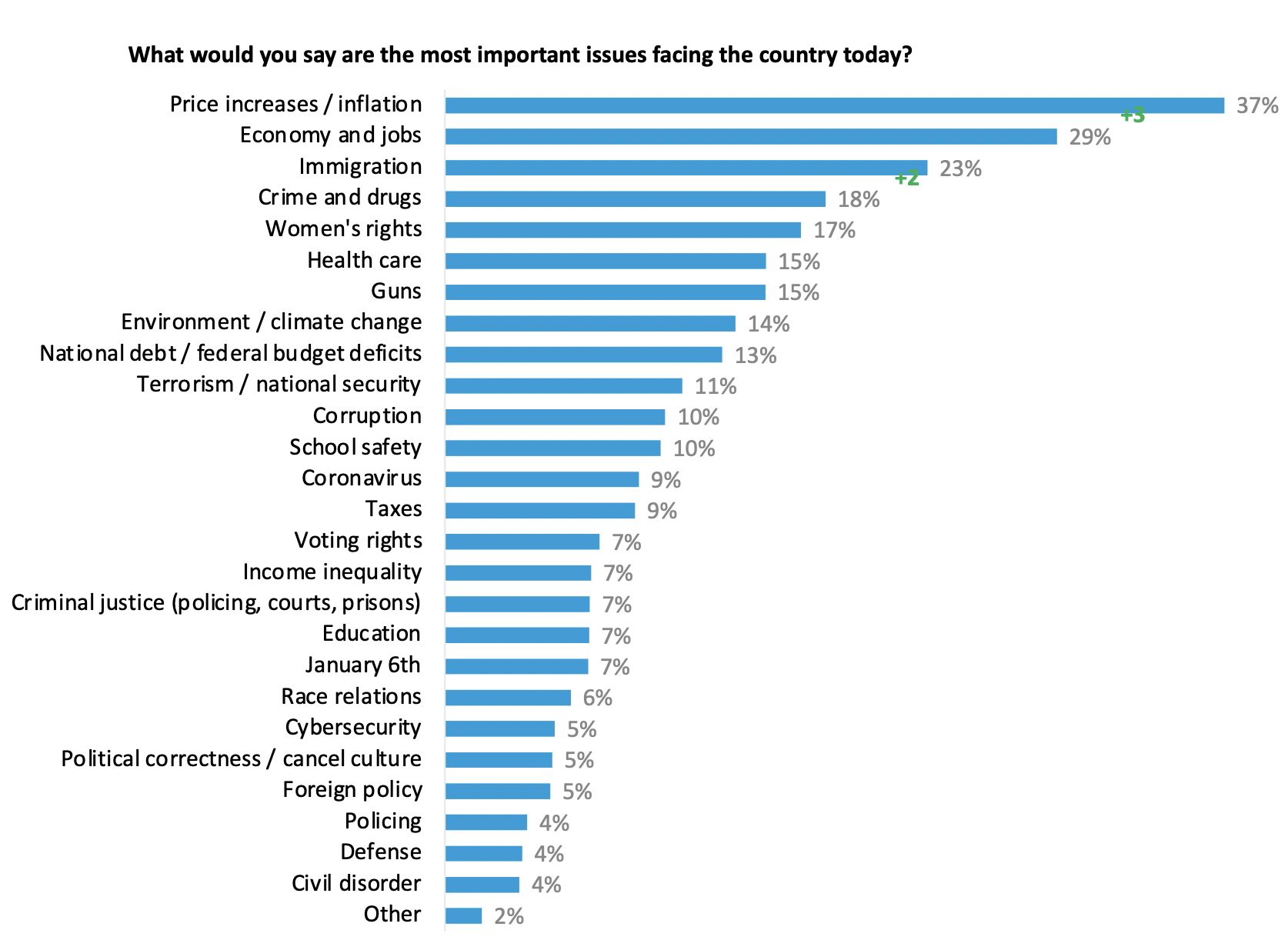 Zipperer takes this new Harvard study and runs with it.

Here in California, Rep. Harley Rouda, Rep. T.J. Cox, and Christy Smith, who’s running yet again in the new CD27, have previously boasted about their endorsements from Indivisible Project, which urges its supporters to defeat “structural racism” by “call[ing] your local officials and tell them to defund your local police department.” (Just for good measure, Indivisible also advocates for the elimination of the U.S. Immigration and Customs Enforcement Agency.)

Zipperer also points out this shocking gap in what voters perceive the parties to be focusing on.

Respondents were asked about the “most important issues facing the country”:

What issues do you think Republicans are focused on?

So that’s a close match. But look at the numbers for “What issues are Democrats focused on?”

This spells trouble for the Democrats. The media has tried to get a narrative going, using one-off examples such as the rejection of abortion restrictions in Kansas and a win in a special election in New York State, that went better for the Democrats than many expected.

But experienced political hacks know that the party most associated with the issues people care about is the party that prevails, especially in midterms, where voters base decisions on issues much more than the dominant personality of a presidential candidate.

Even the New York Times, which has done more than any publication to elevate the clearly mistaken idea that “January 6 matters most” is questioning the strategy. In an article that maddeningly refuses to assign any of the blame for this phenomenon to itself, the Times wrings its hands over the fact that Democrats are declining to run on the massive spending they’ve been doing over the past two years. “Democrats Spent $2 Trillion to Save the Economy,” blares the headline of a thumbsucker by Jim Tankersley. And yet … “They Don’t Want to Talk About It.” Ya think?

Voters aren’t stupid. Neither are Democratic consultants. Both understand that the number one concern, inflation, is largely caused by the exact phenomenon the Times wants Democrats to brag about—reckless government spending.

So that’s one surprising result, perfectly supported by the data.

But the most eye-popping result occurs in the form of what was supposed to be a big Democratic strength—saving democracy. If you consume liberal media, you get the impression that the average American barely notices $8 gas and $5 eggs because he’s so worried about guys dressing up like Vikings and raiding the capital.

But the survey has some shocking finds on that front. For one, voters barely care about amorphous threats to democracy—“voting rights” was listed as top priority by 7% of respondents. But to the degree voters do care, suspicions are much more evenly divided than the media would have us believe.

We have been hearing for two years what a threat it is to America that Donald Trump and many of his supporters do not accept the immaculacy of the 2020 election. Mainstream media makes as a mainstay of its questioning at editorial boards, and even during debates, the insistence that all Republican candidates declare whether they accept the results of the 2020 election. The implication is that anyone who casts doubt on systems that were rushed by Covid-driven fiat by Democratic governors actually favors a fascist takeover of the entire nation. But Harvard’s study reveals that almost as many Americans expressed doubt about the 2016 election as the 2020 election.

It has never been explained why calling into question the legitimacy of the 2016 election makes one a hero while doing the same in 2020 makes one a traitor. YouTube satirist Matt Orfalea made a great video compilation of various Democrats saying exactly that, cataloging liberal icons such as Hillary Clinton, Joe Biden, Kamala Harris, Karine Jean-Pierre, Adam Schiff and dozens more all saying unambiguously that Trump’s election was illegitimate.

The result? YouTube demonetized Orfalea’s video. The tech giant later reversed the decision, but the point was crystal clear—their version of events is the only acceptable version. What’s shocking about the Harvard poll is just how few Americans agree with those priorities.