With the Super Bowl in Los Angeles this weekend, taking place while California remains constricted under Gov. Gavin Newsom’s two-year old State of Emergency, parents are livid that their children are still being forced to wear masks in schools. 80,000 Sports fans get to have fun while kids are abused in school, which is mandatory attendance by law.

Some school districts have seen the light and are loosening or terminating their masking restrictions. The Roseville High School District just unanimously voted to make masks optional for students starting on Tuesday, Assemblyman Kevin Kiley noted.

This was the reaction at a Las Vegas elementary school:

This is the moment a class of Nevada Elementary School students learned news that the Governor ended the mask mandate. @hollandcourtney pic.twitter.com/o34Rt95zie

Parents are holding “No Mask” rallies Tuesday across the state: 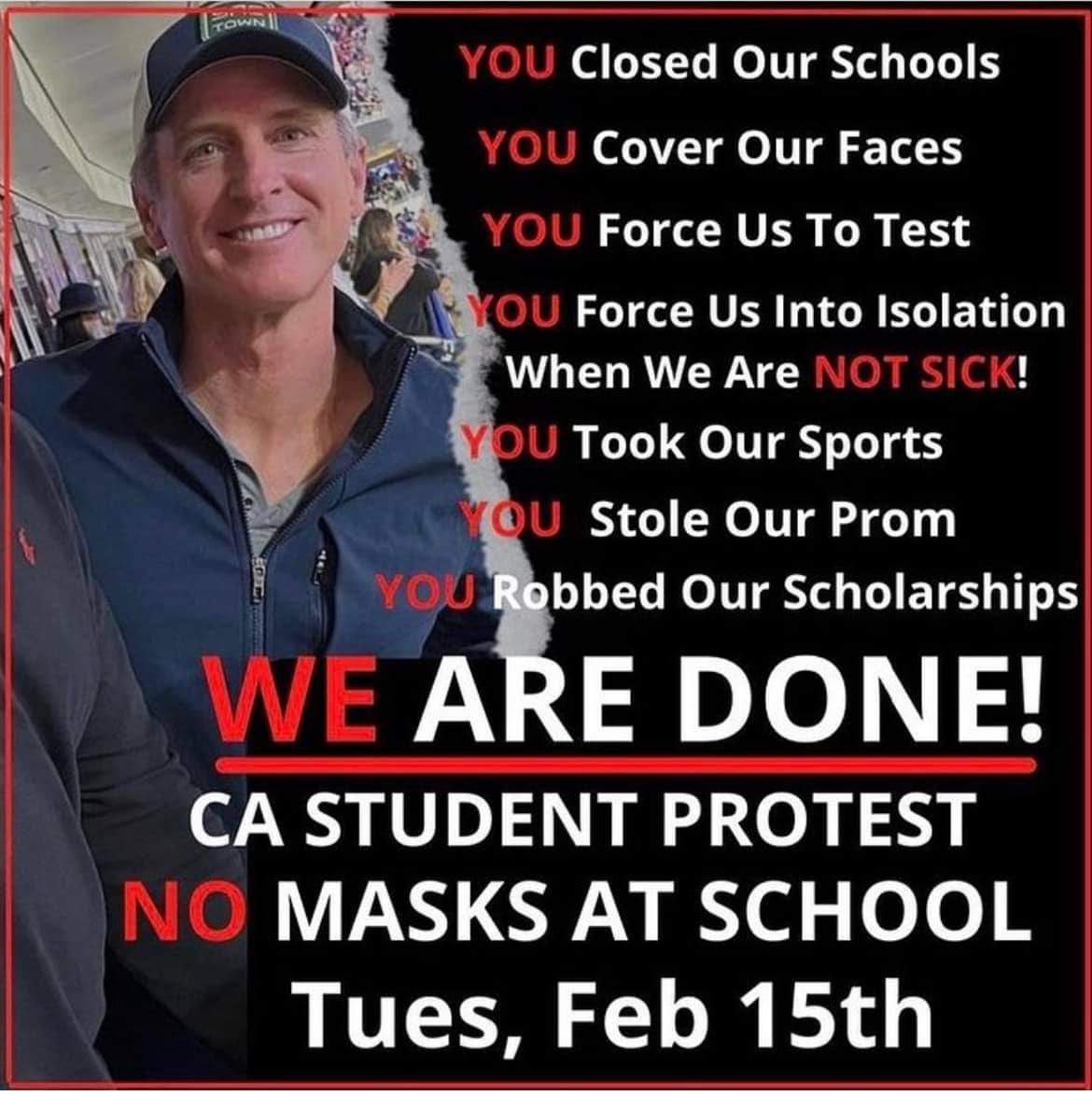 In a heartfelt plea, this parent of five kids took to email to urge Sacramento’s San Juan Unified School District Superintendent to toss out the mask mandate – because “science” and “data”:

Superintendent Kern and Board Members,

I urge you to add an item to the agenda for February 15th’s board meeting that allows masking to be optional indoors and outdoors for all students in San Juan Unified School District. If you need a template, the Roseville Joint Union High School District (RJUHSD) Board approved such a resolution last night. You can view it here:

I am aware that your agendas are crafted 2 weeks out, but with the Governor signaling changes in his mask rules for February 15th, it is appropriate not to delay relieving our children of this awful, completely ineffective and destructive policy. If you find it impossible not to agendize this or a similar resolution before your 3 day notice window, then I would encourage you to make this an emergency item as provided in the Brown Act (Government Code 54956).

Two years in, and the research literature is now becoming increasingly clear: face masks are ineffective against airborne viruses. The Brownstone Institute has produced a compilation of 167 comparative studies and articles attesting to the harm and ineffectiveness of compulsory masking.So the primary question we now face is as follows: Why would we continue forcing students, our lowest at-risk group, to remain masked at schools when we know children do not readily acquire SARS-CoV-2 (very low risk), spread it to other children or teachers, or endanger parents or others at home. Moreover, in the rare cases where a child contracts Covid virus, they have a 99.995 percent chance of survival.

California has seen a 65% drop in coronavirus cases.

This past week the states of New Jersey, Delaware, Illinois, Rhode Island, Massachusetts, Connecticut, Oregon and Nevada all announced that they would drop indoor masking requirements. This included an immediate or hastened phase out for indoor school mandates.

The students of Sacramento County have already suffered through two years of school lockdowns. Our senior has barely had a “normal” high school experience and has lost most of the coming of age experiences that many of us revel in. My heart is broken that adults could torture our children for so long even as they spiral in every conceivable way. Your intransigence is no longer acceptable.

I align myself with the words of Dr. Jeanne Noble, Director of COVID-19 response for the UCSF Emergency Department at the University of California, San Francisco who states “Kids don’t need to be masked. Full stop. They have minuscule risk of serious illness or death from COVID.”

If there is one thing that the pandemic has taught, it is the necessity of believing in science, of following the science; and now the science is leading unmistakably to an unavoidable conclusion: Children should not be masked in school.

The people of California now know the governor and elected officials, who have been repeatedly caught violating their own “emergency” mandates this past two years, think of themselves as the “elite” class, a more advanced form of human than the unwashed masses. Parents are showing these political “elites” that it is time to worry.