“Why aren’t women in upper income neighborhoods pressing charges against transients who attack them in the park or break windows to their home?” a friend asked after learning of a violent break-in attempt in our residential neighborhood. “What is this phenomenon?”

These are valid questions.

Lining many streets in Sacramento are battered old RVs, campers and trailers, vans, and passenger vehicles, which have become homes for many. Homeless transients live in parks and along rivers. Mayor Darrell Steinberg calls them “guests” as if they were invited to live on the streets. He calls them “Unhoused residents,” and “People experiencing homelessness,” as if it was just an accident that they ended up living on the streets.

Recently women have been attacked by violent homeless vagrants in William Land Park, a very large Sacramento Regional park. There are reports all across the city of violent homeless attacking women and children.

In June, a woman I see on my daily morning hikes in William Land Park in Sacramento was attacked by a homeless man. She also refused to press charges even though golfers had to physically intervene and pull the guy off of her.

In September, a “homeless” transient guy out on the streets despite his recent violation of parole, was arrested for raping and murdering a Kate Tibbitts, a Sacramento woman in the Land Park neighborhood, killing her dogs and setting her house on fire. He was a parolee at large, let out on zero bail in June for stealing a car, even with his long history of violent crimes, and having recently been in prison for a violent felony.

I’ve had run-ins with drugged up, mentally-ill violent transients in my own neighborhood. And when it happens, I report the incidents to Sacramento police.

My friend was talking about a harrowing experience a neighbor had with a violent homeless vagrant in her neighborhood. She was awakened very early on Saturday morning by a homeless vagrant breaking glass trying to get into her home. Her dog barked and she yelled at the guy to leave. She called police but declined to press charges even though she could identify him.

However, her refusal to press charges prevents the police from doing anything. What if the transient is known to police? What if others filed charges against him? This guy is still on the street.

This is the woman’s account of her terrifying experience: 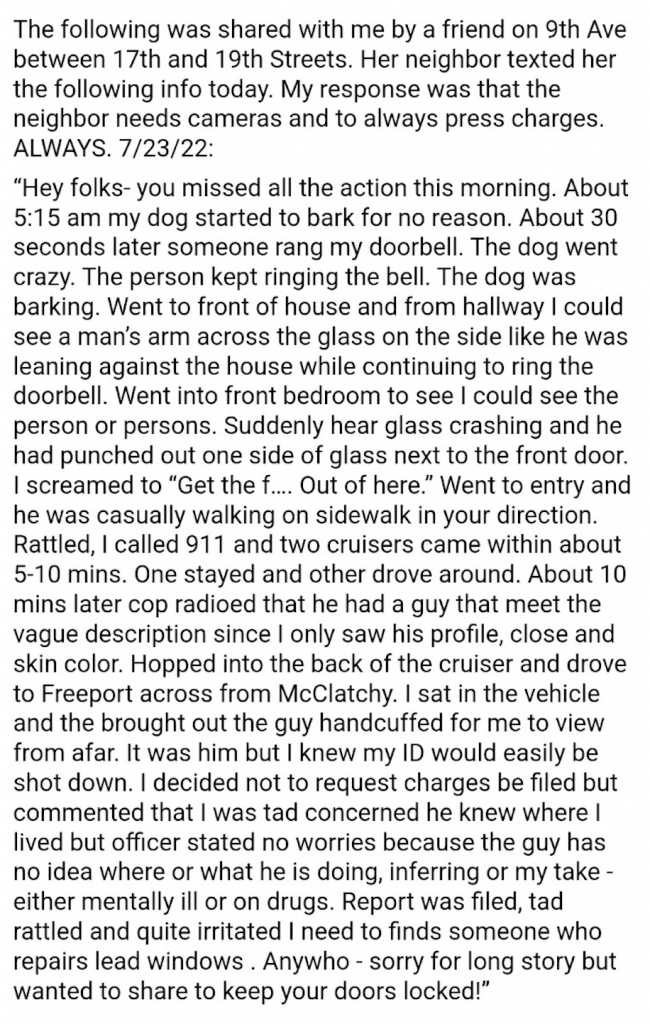 But she wasn’t terrified enough to press charges, even though she was concerned that he knows where she lives, and knows she reported him to the police.

We still see neighbors handing homeless transient panhandlers money, even though neighborhood leaders and the neighborhood association have implored neighbors to not hand out cash to the homeless as it encourages them, and it almost always goes to purchasing more drugs. They have instead been asked to donate to the numerous local non-profit organizations who help the homeless.

“And why don’t these women consider (or care) that by not pressing charges, they contribute to the next crime these people commit?” my friend asked.

While this woman may have felt she was being magnanimous, refusing to report a crime is selfish.

Police departments across the country agree. Because this woman did not report the crime, it’s as if it never happened and the violent vagrant criminal is free to commit more crime, targeting another home, damaging more property and terrifying other women and families.

It’s also important to report crime to get a police report number so an insurance claim can be made.

This homeless woman lives in the park, and frequently screams at people, while making violent slashing movements. The park is home to the Sacramento Zoo, Fairytale Town, Sunderland Amusement Park and a 9-hole municipal golf course.