The wave of power outages in California during the heat wave of 2020 are mostly in the PG&E power grid area where 21 local green energy-buying cooperatives (called Community Choice Aggregators) are buying green power and green jobs for their communities. These co-ops buy power for 10 million customers in 170 cities and counties and their goal is 100 percent green power by the 2030’s.

California depends on 25 percent imported power, mainly hydropower, from other states. However, the grid operator has been unable to buy much imported power during the regional heat wave. The only remedy for this problem is a diverse mix of power sources with green power no more than 20 to 30 percent of the mix. This heat wave shows the folly of shifting to 100 percent green power during hot spells.

Even Gov. Gavin Newsom has been forced to admit green power falls short and blames planners. But the power grid has been deregulated and decentralized to allow local communities to buy their own power, resulting in a lack of diverse enough power sources during hot weather.

Source of Power Outages Claim to be Unknown

The New York Times of August 16 reports that “Rolling Blackouts in California Have Power Experts Stumped.” Bill Powers, a San Diego power engineer stated, “This should not have caused blackouts.”

The technical reason for the rolling blackouts was the California Independent System Operator (Cal-ISO) could not find enough power reserves from out-of-state hydropower suppliers after three in-state power plants had to shut down and wind power dropped as it typically does during the daytime.

The reason for the high demand for electricity is obviously the heat wave combined with humidity that spiked the temperature to 130-degrees in Death Valley. This resulted in a Stage 3 alert where mainline electric utilities had to ask customers to curtail use or they would start cutting power by rolling blackouts. The ISO asserted it was not grid congestion or downed power lines from wildfires, but a true lack of available power plants to come online when other plants failed, causing the shortage.

Contributing to the blackouts was that California depends on 25 percent of imported power from other states, mainly hydropower to reduce smog in air basins. But the entire southwest was hot leaving little surplus power available.

Blackouts Are Mainly a PG&E Thing

The power shortage has a geographic location: mainly in PG&E territory in Northern and Central California (see data below). There were 99 power outages in PG&E’s customer service area on August 18 at 7:15 pm, equating to one outage for every 51,515 customers. But San Diego Gas and Electric (SDG&E) had only 3 outages. Southern California Edison had multiple outages but does not provide data or location of the number of outages online.

In comparison, Arizona Public Service has 2 outages or 1 outage per 600,000 customers, mainly due its greater diversity in power sources. 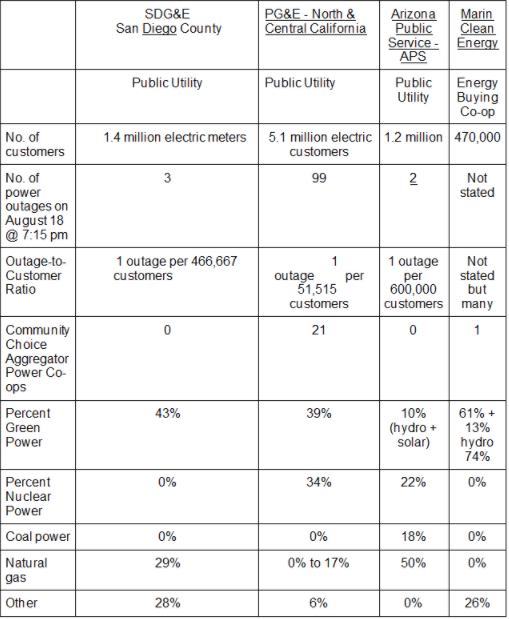 Jill Hanks stated in an article, “Insight into how Arizona Power Company Avoids Blackouts as California Remains on Flex Alert,” that the key to avoiding blackouts is a diverse energy mix.

This can be especially seen in Arizona Public Service (APS) capability of tapping 18 percent of “dirty” coal power that was not available to California electric utilities. Moreover, APS still relies on 50 percent natural gas power, compared to 29% for SDG&E and 0 to 17 percent for PG&E. Natural gas power plants start-up faster and can produce power 24 hours/day compared to wind mainly at night (about 4 hours) and solar power (about 10 hours per day).

Green Power Not a Fit for Nighttime Peak Market

Exacerbating the crisis is the new green energy grid because the peak hours for electricity use are from 6:30 pm to 10 pm when solar and wind are not available. This is called the “Duck Curve” because the time demand energy use profile looks like the silhouette of a duck. So, a green power grid is not a fit for the dual peak load market – peaking at midday and again at sunset. Thus, California’s blackouts are a structural failure not a market.

The institutional source of the blackout problem is the proliferation of community energy-buying cooperatives (called Community Choice Aggregators) in local areas instead of the monopoly utility companies like Pacific Gas and Electric (PG&S), So Cal Edison and San Diego Gas and Election (SDG&E) buying power for customers in their service areas.

This is shown in the data above where Marin Clean Energy, a green power buying co-op for Marin County, depends on 74 percent green power (including hydropower).

Gov. Newsom is calling for an investigation of what happened. One of the items that should be researched is how much energy are green power-buying co-ops buying out of state (especially hydropower), which may not be available in a heat wave. But the recent rolling blackouts have exposed the green power goal of 100 percent green power as a recipe for power crisis after power crisis waiting to happen. There will be stiff resistance to taking green jobs away from local politicians in order to make the power grid more diverse and reliable.

Decentralizing the buying of power to local communities instead of monopoly public utilities, is highly popular because it gives local politicians the ability to buy votes with green power jobs for their cities and counties. It was former speaker of California’s Assembly who in 1963 famously said: “money (and jobs) is the mother’s milk of politics”. California blamed “deregulation” for the Energy Crisis of 2001, which was caused when Pres. Bill Clinton’s 1996 EPA mandate to close old, dirty coastal power plants owned by public utilities in California to clean the air by 2001. But no one is mentioning the word “deregulation” now, despite the green decentralizing of power sources in California.

Latest posts by Wayne Lusvardi (see all)
Spread the news:

17 thoughts on “Too Much Green Power Worsening Blackouts”