Home>Highlight>CA Education Board Approves ‘Pornographic’ Sex Ed
09 May 2019 7:25 am

“How are they helping kids find themselves when they are confusing them about who they are, or they could possibly be nothing at all,” said Stephanie Yates, founder of Informed Parents of California.

What is being taught as sex ed to California school children ironically cannot be spoken on television or radio.

The curriculum changes stem from the 2015 Healthy Youth Act (AB 329) by Assemblywoman Shirley Weber, which was sold as “updating the HIV and AIDS prevention education to reflect today’s understanding of HIV and AIDS.”

However, the “voluntary” instruction is not how this is playing out, according to parents, and Jonathan Keller, President of the California Family Council. “Parents did not sign up for this type of sexual indoctrination,” said Keller. “The state of California should not force moms and dads to chose between participating in public school and protecting their children’s innocence. No student needs to be exposed to this graphic and explicit material. It’s child abuse.”

Parents and leaders of the Informed Parents of California have problems with large portions of the 1000+ page Health Education Framework, which guides curriculum development for the next decade, they highlighted four recommended books to show how offensive, reckless, and immoral the framework is. The links below provide book excerpts to these recommended books. (Be forewarned. Some of the curriculum is very sexual explicit.) 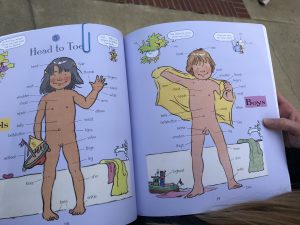 One book, titled “Changing You,” which was recommended for removal, shows cartoon illustrations of male and female genitals to educate students on the terminology. It also explains what “having sex is.” The book was recommended for transitional kindergarten through third grade.

“There are all kinds of alternatives, but they want to teach sex ed with the guise that they were trying to prevent sexual transmitted diseases and prevent teen pregnancy,” said Greg Burt, director of California Family Council. “Now we are teaching kids how to have a robust sex life. Not everything under the sun needs to be taught to our kids, with no moral judgment.”

Legislative attempts to offer parents opt in or out out options have failed. Sen. Mike Morrell (R-Riverside) introduced a bill to have school districts offering sex ed in elementary school require parents to make a formal request, or opt in, to have their children be given the instruction. He withdrew the bill after it became clear it didn’t have the votes to pass the Senate Education Committee, EdSource reported.

Informed Parents of California pulled together the most objectionable portions of the 1000 page framework document in a 24 page summary with excerpts for K-6th grade health lessons, complete with pictures of some of the recommended supplemental materials, included in a California Globe article.

Parents warn that if the state continues to push this sexualized curriculum on their kids without opt out options, they will pull their children out of school in protest, causing schools to lose the “Average Daily Attendance.” The state of California funds school districts based on each student’s daily-recorded attendance.