Cole Harris, 2018 candidate for Lieutenant Governor of California, failed to make the cut for the state’s top two general election, placing third in the June 2018 primary, with 17.5 percent of the vote. And then he stiffed his campaign vendors, according to a recent lawsuit filed by attorney Harmeet Dhillon. The lawsuit says “Harris and Cindy Chen formed a conspiracy to carry out their fraud upon Majority Strategies,” which is seeking more than $400,000 in payments from Harris.

“It was announced this week that the Federal Election Commission fined the Jeb Bush super PAC Right to Rise $390,000 for soliciting a contribution from a foreign national, and the American Pacific International Capital $550,000 for making the contribution, according to the settlement agreement posted online by the nonprofit Campaign Legal Center,” CNN reported. “The FEC found APIC contributed $1.3 million to Right to Rise.”

The Clintons also have history with fishy offshore donors. National Review reminds us that The Washington Post reported in 1998 that the Chinese government attempted to increase China’s influence in the U.S. political process in 1996 in the Bill Clinton re-election campaign, largely covered up by the media. And in her 2008 bid for the White House, “Hillary had to return hundreds of thousands of dollars raised by another Chinese bagman, Norman Hsu, who happened to be a criminal fugitive,” Investors Business Daily reported. “Hsu bundled $1 million for the Clinton campaign through straw donors. He was busted for laundering foreign cash.” In 2015, another major Clinton fundraiser named Ng Lap Seng, aka “Mr. Wu was caught bringing more than $4.5 million into the U.S. during the previous two years, including a suitcase full of $400,000 in cash to New York.”

U.S. Sen. Dianne Feinstein (D-CA), was compromised for more than a decade by a staffer with connections to Chinese spying, the Washington Examiner reported. They also noted “the senator’s long history of lobbying on behalf of China’s interests.” CBS San Francisco reported the “Chinese spy was Feinstein’s driver who also served as a gofer in her Bay Area office and was a liaison to the Asian-American community. He even attended Chinese consulate functions for the senator. Feinstein — who was Chair of the Senate Intelligence Committee at the time — was reportedly mortified when the FBI told her she’d been infiltrated.”

Who is Cole Harris? 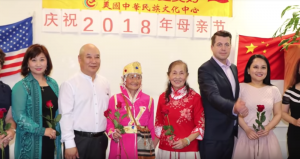 Leading up to his announcement for candidate for Lt. Gov., Harris was unknown in the world of California politics, and according to the lawsuit, “an obscure businessman.” However, Harris gained instant attention after he announced his campaign, for his Instagram photos and other social media posts showing him hanging out with rappers, “posing on a yacht, in front of a private jet and with exotic cars and expensive French wine,” the Los Angeles Times reported. His social media accounts have been removed, but a few lingering images are still available.

“Harris runs a private investment firm in Glendale. On Instagram, Harris flaunts his wealth and taste by posting photos of bottles of Dom Perignon and what looks to be a $3,000 bottle of La Tache, and posing with a Rolls Royce, Lamborghini, and various aircraft,” CalMatters reported. “Harris posted a video of himself being chauffeured in, I think, a Bentley to a State Lands Commission hearing. That shows he knows the lieutenant governor serves on the lands commission. You have to see it.” (the link no longer works.)

In March 2018, Cole Harris announced he was running for California Lieutenant Governor as a Republican, a mere three months before the primary election. He was late to the party since all of the other 11 candidates had announced in Fall of 2017 and had been campaigning. But Harris, an unknown who claimed he was a wealthy businessman, assured his campaign consultants Majority Strategies he would be self-funding his campaign upwards of $10 million, and would acquire additional contributions from associates and friends. And Harris admits that he got money from China, and offered to fly to China to get more money from his business partners.

“In an attempt to demonstrate his wealth, Harris boasted about the $10,000 Hermes belt he had recently acquired, and other expensive items he owned, such as his Lamborghini and private aircraft,” the lawsuit states. “Harris also assured Buerck and Faulkner (of Majority Strategies) that he could easily raise a hundred million dollars from friends and work associates.”

“Harris and Chen routinely displayed their wealth to Majority Strategies, including by flashing their several-thousand-dollar watches, designer clothing, high-end cars, and multi-million-dollar home. As a result of these displays, and Defendants’ representations that Harris would personally ensure payment for all services rendered in connection with the Campaign, Majority Strategies was induced to provide services rendered in services in furtherance of Harris’s campaign for Lt. Governor, for which services Defendants now refuse to pay,” the lawsuit states.

Where the money came from for the campaign is an important question in the lawsuit filed against Cole Harris and his partner Cindy Chen. Harris, who speaks fluent Mandarin, claims Cindy Chen is his wife, but the lawsuit states there is no evidence of a marriage, yet the bulk of the money for the campaign appeared to come from Chen. The lawsuit states that Chris Faulkner with Majority Strategies “witnessed a heated argument between Harris and Chen that, from Faulkner’s understanding of what was said by Chen and Harris, arose because Harris withdrew $200,000 from an account without Chen’s consent. Majority Strategies understood that Chen’s permission was needed with respect to every significant financial decision made in connection with the campaign regardless of whether that decision involved Majority Strategies.”

Cole Harris says he got the money out of his business, but the issue of him fighting with Chen over the $200,000 in cash is very redolent of making proceeds appear to have derived from a legitimate source.

Majority Strategies met with Harris and Chen at their multi-million dollar residence in San Marino in February 2018, and agreed not only to hire Majority Strategies, but Harris said, “We will do whatever it takes to win,” according to the lawsuit. “I can put ten to twenty million dollars for the primary and then another fifty million for the general election.” 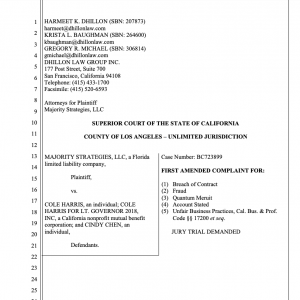 By mid-March, Harris informed Faulkner $1 million would be deposited in the Campaign’s account. “Chen was present during the exchange but concealed the fact (unknown to Majority Strategies at the time) that Harris would likely not be funding the Campaign with solely his own money, but with Chen’s,” the lawsuit says.

The California Secretary of State’s website for campaign contributions finds the majority of Harris’s contributions were provided by individuals with Chinese surnames, and Chinese-owned businesses including massage parlors, day spas, real estate investors and “housewives” who contributed thousands of dollars to the campaign.

It is important to note that foreign nationals cannot make campaign contributions, and Political Action Committees can’t have foreign contributors.

It appears from the lawsuit that Harris’s partner/wife Cindy Chen, or her family, really gave the money. And whatever her legal status is (she could be American) the contribution amounts to an excess campaign contribution. If she is just a conduit for foreign cash, that is both excess and illegal money. The limit for statewide office campaign contributions is $7,000, according to the Secretary of State.

And other than the candidate himself, people including his relatives cannot make contributions exceeding the limit.

“On or around May 14, 2018, Harris stated to Faulkner that the president of Better 4 You Foods, LLC (a business owned and/or controlled by Harris) would ‘come by [Harris’s] house with $200,000 in cash that [Harris] will deposit into the campaign account so we can get back up on TV,’ or words to similar effect,” according to the lawsuit. Faulkner was alarmed by this statement and asked for additional information regarding the source of the funds. “It’s my fucking company and I can take out money when I want,” Harris reportedly said to Faulkner, the lawsuit says.

Faulkner reminds Harris he needs to maintain accurate bank records in connection with all campaign donations, the lawsuit states. Faulkner expresses concern several times in the lawsuit about commingling of personal funds, business funds and campaign funds by Harris and Chen.

“Some or all of the $2 million funds contributed to his campaign, were actually given to Harris by some other person (including Chen) or entity for the purpose of funding the campaign,” the lawsuit states. “By representing such funds as personal contributions to the campaign, Harris intended to circumvent campaign finance laws and regulations, including limitations on campaign contribution amounts.”

The lawsuit was recently amended to include Cindy Chen, as well as accusations of fraud that include Chen: “Chen, who, with full awareness of the above representations, and who participated in weekly budget meetings with Majority Strategies about the campaign, fraudulently concealed from Majority Strategies information that she, either entirely or in part, was the ultimate source of funds for Harris’s campaign, and that Harris could not or would not personally be able to contribute the promised funds to the Campaign.”