Home>Highlight>Sacramento Utility Penalizing Working Families With Tiered Rates
24 May 2019 3:00 am

The Sacramento Municipal Utility District announced last year Sacramento electricity ratepayers would be under a new rate system that charges residential users higher rates between 5:00 p.m. and 8:00 p.m. — just in time for everyone to arrive home after work and begin evening family rituals: homework on computers, dinner, television, stereo, baths, laundry, and dishwasher after dinner. God help you if you plan on entertaining between 5:00 and 8:00 p.m. during the week. That’s going to be expensive. But on weekends, the rates are back to normal, demonstrating that this rate increase is indeed intended to target working families.

“A SMUD analysis suggests that 57 percent of customers would experience a monthly bill increase if they do not change their usage patterns.,” the Sacramento Bee reported. “A statewide customer advocacy group says switching to time-based rates does not necessarily prompt lower usage or energy conservation, and it could penalize some families who are not in a position to change their use hours.”

“We think customers should be rewarded with tiered rates based on how much you use, not when you use it,” said Mindy Spatt, spokeswoman for TURN, The Utility Reform Network. “With time-based rates, they are rewarded if they are in the enviable position of being able to shift their usage. If you work during the day, you can’t do that.” 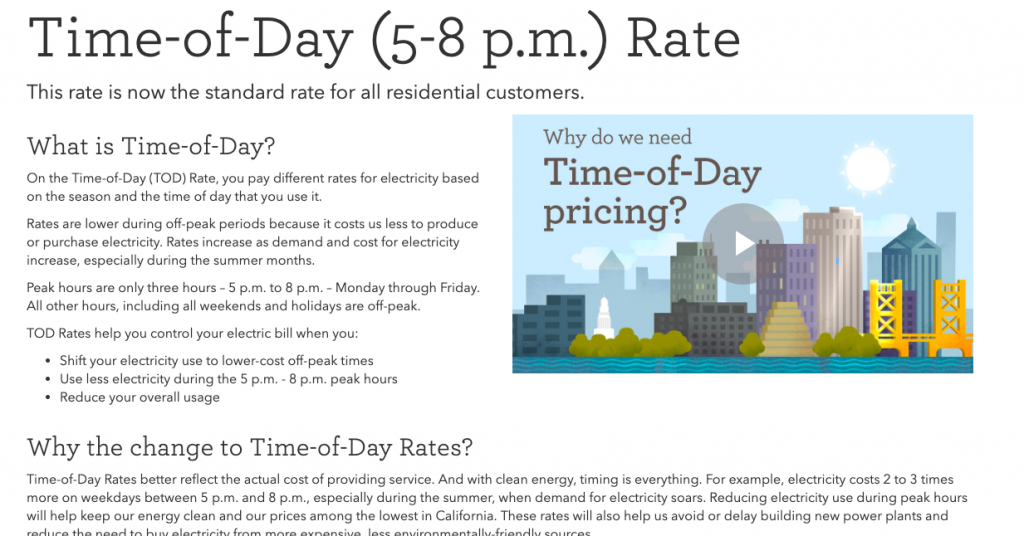 SMUD says to help ratepayers control our electric bills we must:

“With the demand and the price increases, it becomes difficult for utilities to keep sending (electricity at) a fair price to the customer,” said Alcides Hernandez, SMUD pricing supervisor. “The intent is that SMUD is not going to make any extra revenue from this.” The new rate system “gives customers the power to manage their bill. The decisions is theirs,” Hernandez said.

But the goal doesn’t actually appear to be for customers to use less power; “The utility provider said the rate increases will be used for upgrades for a modern energy grid and to meet customer needs,” according to the Sacramento Bee. “The increases also will go to improve technology that SMUD customers use to monitor and manage their energy use.”

In my home, we’ve done everything the utility companies have told us to do: bought energy star appliances, switched out to all LED lightbulbs, upgraded the heating and air conditioning system, we keep the thermostat low in winter and high in summer, only to have our rates hiked anyway.

Public comments made during the 2017 proposal process, published on SMUD’s website, were all about the same. On time-of-day rates, a customer said: “I can hardly wait to see how I’ll be gouged by my utility provider so that I can be comfortable in my own home because I need to use the electricity when I need to use it. I suppose I’ll have to get used to being uncomfortable.”

Other public comments made were outraged at the proposed rate increases.

The February 2019 data of electricity rates in the country show the average U.S. price of 12.70 cents per kilowatt hour. California is 19.82, one of the highest in the country, despite the natural gas and petroleum resources indigenous to the state, but heavily regulated and limited by the Legislature. And now working families in the Sacramento region are paying even higher rates, penalized because of normal work schedules.