Exit polls in the recent CA-25 Congressional race between Democratic Assemblywoman Christy Smith and Republican Mike Garcia revealed a lot of voters voting red as a protest over Assembly Bill 5, the bill authored by Assemblywoman Lorena Gonzalez (D-San Diego) which has limited Californians’ ability to work as independent contractors and freelancers.

Despite her assurances that the bill will cover all workers, unlike those with carve outs, Democrats killed the bill.

The responses below are from mostly Democrat freelancers and independent contractors who say they are fed up with California Democrats. Notably, most say it was Democrats who voted to pass the bill, and the same Democrats refuse to do anything to help the out-of-work freelancers – it’s only Republicans proposing fixes or full repeal of AB 5. Here are some of their comments from news articles, and Facebook:

“Voted democrat since 1976. Republicans were bad before and are far, far worse today. Because of AB5, and the absolute deafness of California democrats, I voted republican in the local elections last round and will do it again in November. Watching online as my artist friends, long time liberals are doing the same, all of us with a bad taste in our mouths. But if you’re going to take away our profession, then we will take away yours.”

“I have been reading post after post of Democrats (like myself) who are disgusted with the California Democratic party. The problem, however, is that complaining amongst ourselves is preaching to the choir.”

“First the Democrats got a majority in the legislature. Then they got a super majority. Then, with the Governor, they got a trifecta. Then they no longer felt any need to address the concerns of their constituency. From One Democrat who will vote for those who are still listening.”

Surveys on Facebook also show how many Democrats are disenfranchised by the Party: 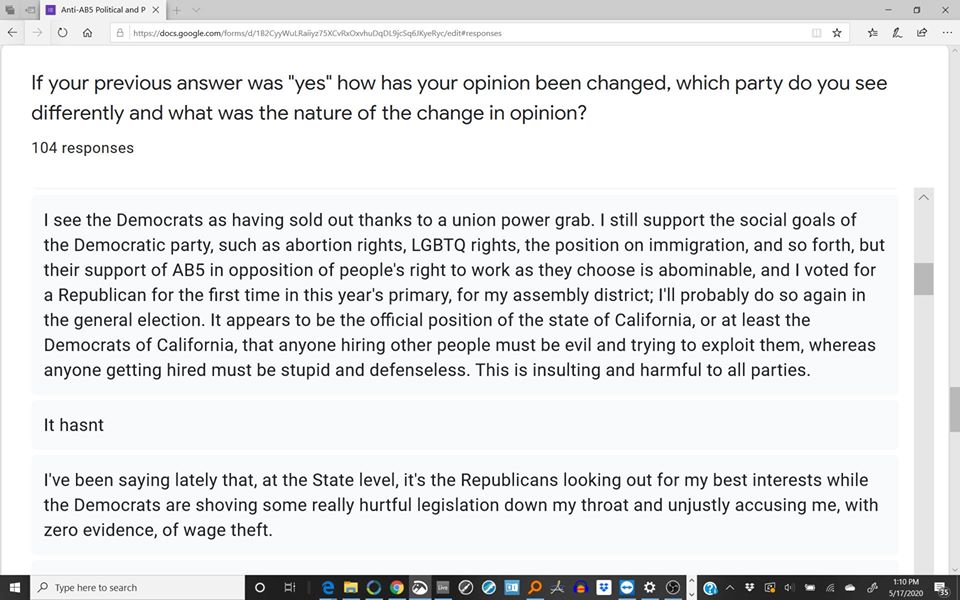 “It occurred to me that we need to share our disgust with those who might become alarmed by this growing revolt… The California Democratic Party.”

“We’ve only got 170 days to get out the vote against the people who thrust AB5 upon us.”

“I’m Sick of how lawmakers who defend AB5 do so by Criminalizing Employers, business owners in general terms. NOT ethical. OMG’sh, SENATORS PLEASE STOP and others, saying your goal is to protect us by taking our ‘freedom of choice’ away from us.”

“Freelancers came out in full force today to offer public support for Senator Shannon Grove‘s AB5 Repeal-and-Replace bill, SB806. Unfortunately, it failed to pass in the five-person Labor Committee by a vote of 4-1. Most notable were the condescending comments by Senator Hannah-Beth Jackson (D-19), who referred to our freelancer careers as mere ‘lollipops.’ Those of us who watched the hearing live are still seething about Senator Jackson’s many misinformed statements. Much gratitude to Shannon Grove for continuing to fight the good fight on behalf of worker freedoms.”

“yep! Between AB5 and Newsom’s handling of Covid, I will never vote blue again.”

“Thank you from a life long democrat who is an artist who wishes CA would repeal AB5 altogether and stop putting thumbs in a dam that’s ready to break.”

“The easiest way to get rid of AB5 is to FIRE the California supermajority and elect Republicans. Elections have consequences. Please accept reality and #WALKAWAY“

And from Sen. Shannon Grove: “The Governor just announced his May Revision to the #CABudget… I wanted to point this out: The over $20 Million for #AB5 enforcement still remains in the budget. Are you kidding me? #CADeservesBetter”