Gov. Gavin Newsom held a press conference Monday at the State Capitol to discuss and clarify his order removing the California National Guard from the California/Mexico border. Prevalent and frequently mentioned in his remarks was obvious disdain for what he referred to as “political theater” of a “manufactured crisis” at the border.

“The Border ‘emergency’ is a manufactured crisis,” Newsom said. “And California will not be part of this political theater. Which is why I have given the National Guard a new mission. They will refocus on the real threats facing our state,” said Newsom. “This is our answer to the White House: No more division, xenophobia or nativism.”

No one at the press conference asked Newsom about the latest migrant caravan of thousands heading to Tijuana from Central America and Mexico.  “Tremendous numbers of people are coming up through Mexico in the hopes of flooding our Southern Border. We have sent additional military. We will build a Human Wall if necessary. If we had a real Wall, this would be a non-event!” Trump said in a Feb. 5 Twitter post. 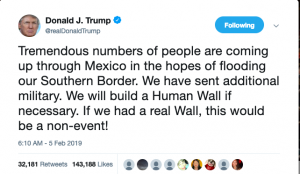 While he did not directly name President Donald Trump, Newsom made very clear he believes the border crisis is “hyperbole.” When asked about the human sex trafficking problem also taking place at the Mexico border, Newsom said it was a “false narrative” and “overstated.” Yet he acknowledged that there is a drug trafficking problem at the border, and that the California National Guard was effective in apprehending drug runners.

“As it has been reported, tomorrow I intend to broaden our effort to explain my intention to change the deployment of our national guard at the border, advanced last year by Gov Brown,” Newsom said. “I think this whole border issue is a manufactured crisis. We are not interested in participating in this political theater.”

However, it was not Donald Trump who signed the order to deploy the California National Guard, it was former California Gov. Jerry Brown following a request of the President. Are the comments about “political theater” and “manufactured crisis” a direct rebuke of the order that was signed by Gov. Brown?

Newsom said California has the lowest number of border crossings since 1971. “People living here without documentation commit crimes at a lower level than those here legally.”

He also said there are “550,000 fewer people in this state without documentation than a decade ago.”

“The rest is just a lot of misdirection and a waste of time,” Newsom said. He said he is most interested in doing the right thing, such as “efforts the National Guard has been doing in drug trafficking.”

Newsom said of the 360+ National Guard members on the border, he will keep 100 of them behind, primarily at ports of entry “where most of the problem activities are taking place.”

In preparation for the next fire season, Newsom said the National Guard will work with Cal Fire on fire prevention, and in augmenting the obvious need for more fire suppression.

In his press statement following the press conference, Governor Newsom said his order redeploys these personnel to focus on the actual threats facing the State of California. It does so by:

The guard will begin making preparations to carry out the order immediately and draw down by March 31, 2019.

Newsom spent time on illegal marijuana grows and drug cartels: “As we move from the illegal to legal cannabis market, we have to hold the illegal accountable.” He added that the illegal cannabis grows are more stubborn, and are acute fire safety and environmental issues. He also warned of the need to curtail drug cartel activity.

“Since the President has asked for an additional 3,750 troops sent to the border, then why do you need to National Guard?” Newsom asked. “I hope you ask who is paying for that deployment – how many dollars is being wasted.”

He added: “This is the theater of the absurd.”

A member of the press asked Gov. Newsom if his Executive Order ignores human sex trafficking at border. Newsom pivoted and said, “A great New Yorker piece addresses this,” but didn’t identify any more about the article.

“The real issue is drugs,” he said. “On the issue of drugs, we’ve seen some success with this deployment.”

Newsom was asked about President Trump threatening to withdraw federal funds over California’s illegal immigration policies. “I’m not concerned about what we are doing,” Newsom said. “I’m more concerned about those negotiations, that could expose our state to emergency funding – disaster relief dollars…” he added, regarding the potential for another government shutdown if Congress and the President cannot agree on border wall funding in the budget.

A reporter asked, “if President Trump does withhold federal funds, does the state have any recourse?” Newsom said his administration “has been reviewing what that looks like.  We’re trying to be very responsible here – there are legitimate concerns. We are working very collaboratively.”

Trump Tweeted Monday morning, “Will be heading to El Paso very soon. Big speech on Border Security and much else tonight.”

4 thoughts on “Gov. Gavin Newsom: “Theater of the Absurd” at Mexico Border”