California Gov. Gavin Newsom announced Thursday he will be traveling to Central America in April to “meet with leaders to learn about root causes of migration and lift up the deep ties between California and Salvadoran communities.” 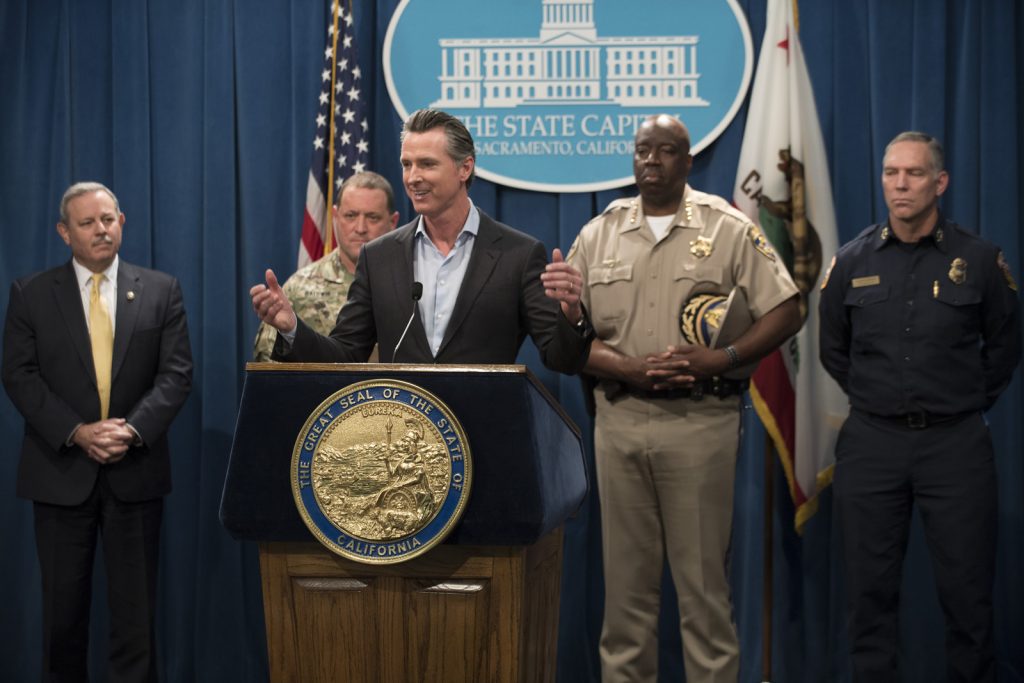 The governor’s trip is reminiscent of former Gov. Jerry Brown’s travel to China to meet with the Communist dictator President Xi Jinping, signaling to the world his fidelity to the unratified and dubious Paris Climate treaty, in spite of President Donald Trump’s withdrawal from the pact. This is not the purview of a governor of one of the 50 United States, despite Newsom’s desire to make California “its own nation-state,” because President Trump is “fundamentally at odds with California values,” the governor said in his February State of the State speech.

“This is our answer to the White House: No more division, no more xenophobia and no more nativism,” Newsom said in his State of the State address.  Newsom also brought up “fear mongering coming out of the White House about this so-called border security.”

Newsom has openly defied President Trump on illegal immigration since his election. Newsom removed California’s National Guard troops deployed to the border with Mexico, saying California would not be part of the Trump administration’s “manufactured crisis.” And Newsom and Attorney General Xavier Becerra, leading a 16-state coalition of Democrat Attorneys General, filed a lawsuit in the Ninth Circuit U.S. District Court challenging President Trump’s declaration of a national emergency, claiming “President Trump has veered the country toward a constitutional crisis of his own making.”

Newsom has pledged $25 million to aid asylum seekers and wants to expand access to health care for young people living in California illegally, AP reported. One of the first bills he signed as governor provided $5 million to help open a migrant support center.

Governor Gavin Newsom “hosted a roundtable” with Central American community leaders Thursday in Los Angeles “to examine the root causes of migration and discuss California’s efforts to provide relief and humanitarian aid to asylum seekers fleeing poverty and violence in their home countries,” his press statement said. At the roundtable, the Governor announced his first international fact-finding mission to the Republic of El Salvador in early April.

“While the Trump Administration demonizes those who are fleeing violence from Central America, California is committed to lifting up our immigrant communities and understanding the root causes of migration,” said Newsom. “I am looking forward to traveling to El Salvador in April to talk with the nation’s leaders and activists while deepening the bond between our families and communities.”

Those groups have been vociferous activists for illegal aliens. This is explained in a 2018 Los Angeles Times article about how the Dreamers advanced their cause:

“Demographics alone can’t explain the nation’s overwhelming support for Dreamers. It is the result of dedicated activism and strategic alliances. Many Dream Act organizers, such as Greisa Martinez, of United We Dream, and Felipe Sousa-Rodriguez, cut their teeth on grassroots issues, starting with local immigrant rights and college access for those in the country illegally. They staged teach-ins, then sit-ins, then hunger strikes, upping the ante to stay in the spotlight. When the networks and newspapers ignored them, they turned to social media, over the years rallying more and more of the undocumented, old and young, to share their experiences and come out of the shadows.”

Maria Elena Durazo is the most recent former Los Angeles County Federation of Labor head, a well-known group of socialist and Communist California labor officials and Democrat Party operatives who created a program to target Latinos and immigrants (illegal and legal) to permanently drive California politics far to the left, Democrat political consultant Richie Ross wrote in CalBuzz in 2010. Ross openly boasted of targeting the Latino community’s fear of anti-illegal immigration measures, to drive the community even further into the arms of the Democratic Party.

Newsom’s statement about illegal aliens coming “legally” to our border is fighting words, and boldly illegal. The surge of aliens from Central America crossing our borders illegally is solely because of our outdated laws demanding catch-and-release. This has created a dire crisis at our border.

The United States Southern Border is overwhelmed with illegal immigration, gang violence, crime, drugs, and human trafficking. President Trump has requested a modest amount of funding to address these issues while Democrats and some Republicans in Congress continue to resist in the name of politics.

“In his first weeks in office, Governor Newsom signed AB 72, legislation to fast-track state aid to asylum seekers who were abandoned by the federal government. It was the first bill he signed into law. AB 72 established a Rapid Response Relief Fund of $5 million in immigration assistance, which helped support the opening of a migrant support shelter.”

“The nearly 1.4 million immigrants from El Salvador, representing one-fifth of its population, account for the second-largest Latin American group in the United States, after Mexicans. Nearly half — approximately 680,000 Salvadorans — live in California. They make up the largest population of Salvadorans in any U.S. state. El Salvador’s rate of people driven from their homes due to violence and conflict — 3,600 out of every 100,000 inhabitants — is second only to Syria.” 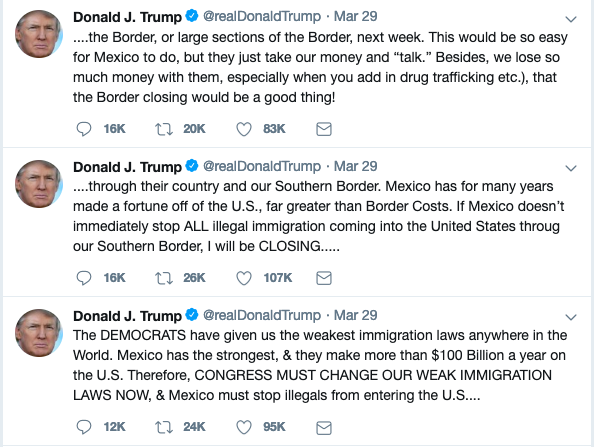 “The Governor also announced his plans to open a regional field office in Los Angeles, which is slated to open this summer. It is part of his broader push to bring state government closer to the people it serves. He will be announcing other offices in the coming weeks.”

“Vice President Pence said that Honduras President Juan Orlando Hernandez told him that the caravan had been ‘organized by leftist organizations and financed by Venezuela,'” an Investors Business Daily editorial reported. “Meanwhile, the U.N. is committing resources to the caravan. In essence, it uses U.S. taxpayers’ money to fund a violation of their own border. That way, the U.S. can join all the other countries with a mass immigration problem.”

President Donald Trump announced Friday he may close parts of the U.S.-Mexican border “as record numbers of migrants surge through the legal loopholes created by Congress and judges,” Breitbart reported.

President Trump has ordered for the stopping of aid to the Northern Triangle countries of Honduras, El Salvador, and Guatemala, after criticizing them for failing to stem the tide of their citizens traveling north and entering the United States illegally, the Epoch Times reported. About a million citizens of the three countries have been caught by Border Patrol between fiscal years 2013 and 2017 (pdf) trying to enter the United States illegally. U.S. taxpayers gave the countries nearly $2.3 billion in aid in those years.