Hollywood’s credibility has had a very bad month. In trying to carry water for President Joe Biden’s disastrous withdrawal from Afghanistan, celebrities have been exposed more than ever as partisan actors on Middle East conflicts, the plight of women and girls, and the horror facing the LGBT community. Now, as America’s longest war ended August 31st, Hollywood can add animal rights to its litany of faux causes.

The withdrawal from Afghanistan has been an unmitigated disaster by almost every metric save sticking by the timeline. Still, Hollywood remains dutifully committed to their pal in the White House. Worse, most pretend like none of this is happening at all.

A social media post went viral over the weekend showing caged dogs being abandoned at Kabul Airport in Afghanistan in front of a damaged American helicopter. USA Today noted, “In the closing days of America’s longest war, conservative activists, politicians and animal lovers raised alarms online that the U.S. was not evacuating its service dogs.” The actions by the administration have been condemned by American Humane and called out by PETA.

The Pentagon has denied the allegations that any military service animals were left in Afghanistan and says the pictures being shared were of local contracted animals that were not in the care of the U.S. military. The framing from the Pentagon is striking. They are saying that even though these animals helped the United States in their war effort, they were technically not our responsibility. Their statement negates the service these animals provided our troops and allies.

People are left to either believe the Pentagon or not as they offered no proof that every military service dog in their care has made it safely out of Afghanistan. Given the recent track record of the White House, it is anyone’s guess as to their honesty.

What is clear though, animals who assisted in the war effort were left behind to face a future of being strays or tortured by Taliban militants. It is yet another emblem of the withdrawal at large which saw 13 service members killed, hundreds of Americans left in Afghanistan, billions of dollars in military equipment left to enrich terrorists, local women left to face a life of perpetual rape and gay men treated as sheep waiting to be slaughtered. Hollywood’s response to all this? Nada. Zilch. Bubkes.

Notably, the former Real Housewife of Beverly Hills, restauranteur, and star of Vanderpump Rules is the only one who has shown any support for the dogs being left in Afghanistan. She retweeted a post calling on Biden and his administration to evacuate the service animals who were assisting the U.S. military. However, Lisa has yet to make any public statement on this issue. My request for comment to Vanderpump’s manager went unanswered. Regardless, she deserves credit as being the only celebrity so far to raise awareness to this developing story. One would expect her to make a statement soon as she has opened Vanderpump Dogs Rescue Center, launched a foundation for her activism, and has even been recognized by Congress as a proponent of passing House Resolution 401, which urges all nations to outlaw the dog and cat meat industries. While dogs wait for her comment, she can be commended for putting her money, time and effort where her mouth is.

Now to the others. 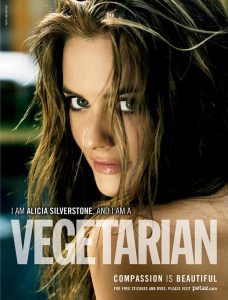 Joaquin Phoenix is the most notable animal rights activist in Hollywood and has seemingly endless articles attributed to his various projects and work. In fairness, the Joker does not have a social media presence in which he spouts his opinions. He is also rather private regarding giving interviews. However, he has not made any public statement on our furry friends in Afghanistan. It’s shocking that PETA’s 2019 “Person of the Year” has remained silent as animals that could have been easily rescued were left to die. Phoenix has led National Animal Rights Day protests, given many speeches and has even dedicated himself to living as a vegan yet has not called on the Biden administration to rectify this disaster.

Alicia Silverstone, another Hollywood animal rights activist and vegan also remains quiet. She has garnered fame and notoriety for fighting for animal rights, has social media platforms to message effectively, yet chooses to withhold her activism on this cause. Why? This is an actress who posed nude for PETA in 2016 highlighting the brutal abuse sheep undergo during their shearing. Where is her outrage? Does she remain Clueless that the Biden administration left animals stranded?

These animals in Afghanistan deserved better from this administration. Like every other issue surrounding the withdrawal, elected officials, the establishment media, Republicans and Democrats alike are criticizing Joe Biden ceaselessly. Even CNN, normally indistinguishable from state media when a Democrat is in the White House, has been tough on the president.

The only category of people who seem too scared or uninformed to rightly call out the inhumane treatment of our four-legged allies are celebrities. Again, they reveal themselves as committed to their causes only when it suits the purposes for elevating their reputations. As this column consistently points out, if someone is going to make themselves an activist, they should be treated as such. These stars and starlets have the responsibility to stand up with the courage of their conviction, even if it means calling out the guy they likely voted for. Until such a time, they continue to be hypocritical actorvists, ignoring the barks of animals while they themselves have forgotten how to bite.