The mainstream media is presenting Katie Hill as the victim, and her press statement does nothing to dissuade that notion.

“It is with a broken heart that today I announce my resignation from Congress,” she wrote in a statement released and posted on Twitter Sunday. “Having private photos of personal moments weaponized against me has been an appalling invasion of my privacy. It’s also illegal, and we are currently pursuing all of our available legal options,” she added. “However, I know that as long as I am in Congress, we’ll live fearful of what might come next and how much it will hurt.” 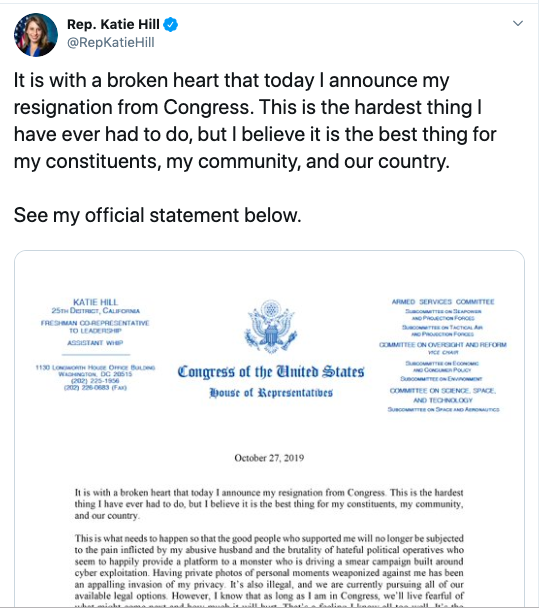 Hill wrote a letter last week claiming to be the victim. “I am going through a divorce from an abusive husband who seems determined to try to humiliate me,” she wrote. “I am disgusted that my opponents would seek to exploit such a private matter for political gain … I, like many women who have faced attacks like this before, am stronger than those who want me to be afraid.”

In one California Globe article revealing Katie Hill posing naked with a Nazi-era Iron Cross tattoo on her bikini line while smoking a bong and making out with her young female aide,” we found another photo of Hill holding a sign which said, “Stop Kavanaugh.”

Hill was very vocal during the Kavanaugh hearings calling him a “predator.” She will be afforded due process, which she did not see fit to extend to Justice Kavanaugh – for whom the outrageous allegations proved false.

Who is the Victim?

Over the course of 10 days, the explosive story of Freshman Rep. Katie Hill only got stranger: a lengthy “throuple” relationship with the young staffer, photos of bong parties, many naked photos, and online sex ads.

Her relationship was memorialized in photos.

If Hill was the victim, why did she form a joint fundraising committee with the California Democratic Party, Hill 2020 Victory Fund, Statement Of Organization, filed October 21, just three days after Hill’s sexual misconduct story with her staff was revealed?

The Associated Press put its own spin on the Hill sex scandal: “In recent days, Hill’s Los Angeles-area constituents were wrestling with questions about who might have been wronged, how much it matters and whether any punishment was warranted.”

The subject of Hill’s affections was a 22-year old staffer in her Congressional office, in what can only be described as “predatory” behavior.

DailyMail.com reported and posted photographs of Katie Hill posing naked with a Nazi-era Iron Cross on her bikini line, while smoking a bong and making out with her young female aide.

“Hill’s wild lifestyle has been laid bare in a cache of texts and intimate photographs obtained by DailyMail.com, as sources revealed Hill and Heslep also posted her naked photos online under a thread called ‘WouldYouF**kMyWife’,” DailyMail.com reported.

Katie Hill is no victim.

As I reported last year when the California State Assembly investigated groping allegations by Daniel Fierro against Assemblywoman Cristina Garcia (D-Bell Gardens), there has been a deafening silence from the Legislature’s Women’s Caucus, and legislative leadership. However, they were vocal on the sexual harassment charges against their male colleagues.

Leadership in the Assembly played down the charges against Assemblywoman Garcia, as did the media, most commonly referring to the sexual harassment allegations against Garcia as “misconduct.”

Many workplaces have strict no-fraternizing rules for good reasons. Relationships in the workplace are complicated, emotional, impulsive, hysterical, irrational and inevitably inelegant during rocky times and breakups.

House rules were changed last year to prohibit inappropriate sexual relationships between members and their employees.

Yet some elected knuckleheads in Congress and State Capitols ignore the best legal and Human Resource advice, as if they are royalty, immune from consequences.

Men and women in and around the California State Capitol ignored obvious warning signs, and dipped their pens into the Capitol and office inkwells anyway.

And the same people in the media who wrote thousands of words demonizing males for for their sexual indiscretions with staffers, ignored the Katie Hill scandal, or gave her a free pass for her egregious abuse of power of a young staffer.

“For many, the lure of the Capitol culture is sexy, naughty, seductive and provocative,” I wrote in 2017. “Power is magnetic to the corruptible, and often attracts pathological personalities for whom an extramarital romp, or convention liaison causes no moral dilemma. The recent extramarital affair between California Assembly leaders cost Californians millions of dollars – and not in settlement payouts. We all got screwed in that affair.”

For the vulnerable naïve young interns, fellows and staffers, when the powerful prey upon them, it’s out of a sense of entitlement. When a Senator picks up a 19-year old intern at the airport, and takes her to his hotel, (a task usually done by a staffer), he’s got something on his mind besides politics and policy.

When a lawmaker pays too much unwanted attention to another lawmaker’s scheduler, it’s out of a sense of entitlement.

And they know it.

“The culture of dignity is now giving way to a new culture of victimhood in which people are encouraged to respond to even the slightest unintentional offense, as in an honor culture,” according to Jonathan Haidt a social psychologist at the NYU-Stern School of Business, and co-developer of Moral Foundations Theory. “But they must not obtain redress on their own; they must appeal for help to powerful others or administrative bodies, to whom they must make the case that they have been victimized.”

If Rep. Katie Hill was a man and a Republican, the media and “MeToo” feminists would demand a public flogging.

Lauded as House Speaker Nancy Pelosi’s protégé’ after being appointed Vice-Chairwoman of the House Committee on Oversight and Reform by the Speaker, expect Katie Hill to put up a fight worthy of Bill Clinton.