California Governor Gavin Newsom and his family are vacationing in Montana – one of the 22 states on California’s list of state-banned travel. 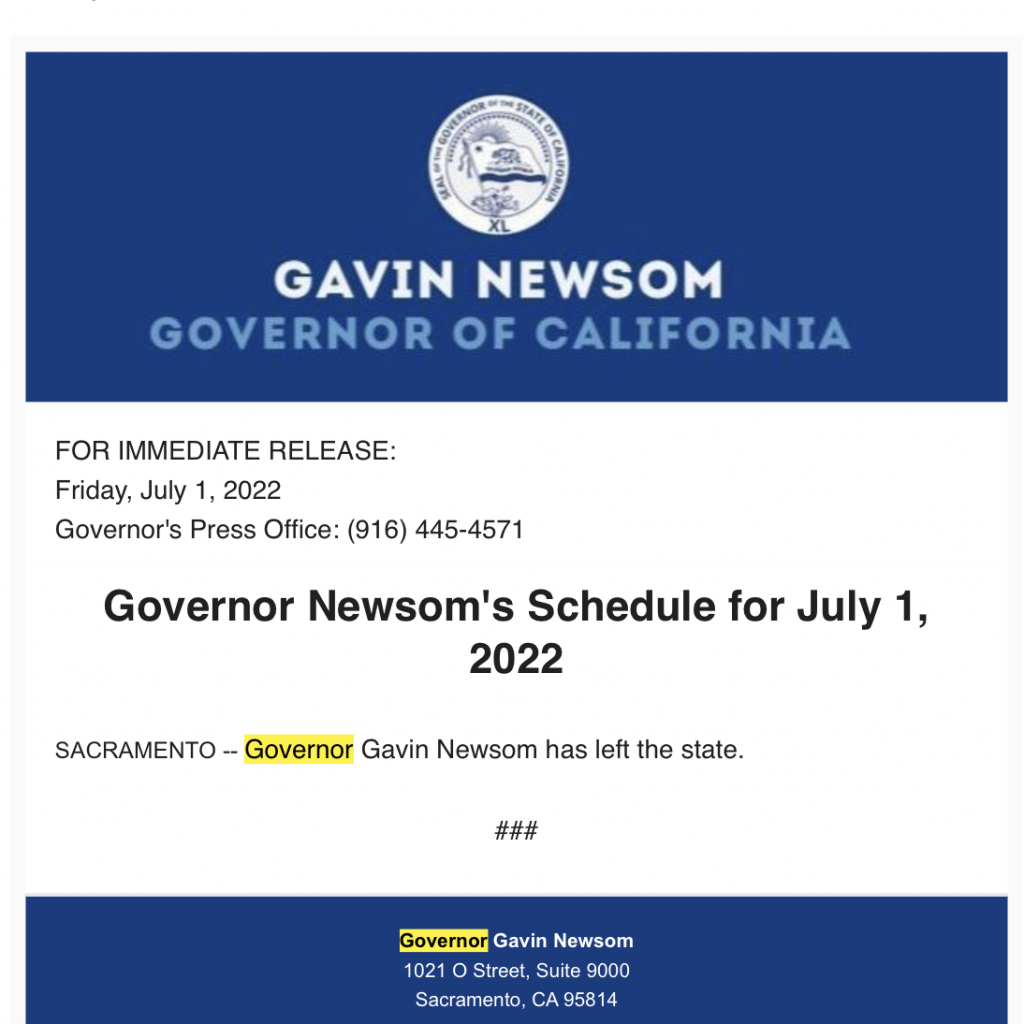 His press office did not say “Governor Newsom and his family will be on vacation,” which no one would have batted an eyelash over during the 4th of July holiday weekend.  His press office does this when he and they don’t want anyone to know where he is going.

Notably, the Globe reported on July 1st that California Attorney General Rob Bonta announced that Arizona, Indiana, Louisiana, and Utah would be added to the list of  states that California bans state-sponsored travel to over their LGBT and abortion laws, bringing the total number of banned states to 22.

We’ve been through this with Newsom before. As the Globe reported in March, “Well-traveled Governor Gavin Newsom, who made national headlines with a posh getaway to a Cabo San Lucas Villa in November, is heading south once again.”

Interestingly, at that time, Politico reported the governor’s spokesperson said Newsom is “On vacation with his family in Central and South America until April 18, the end of the Legislative spring recess. ”

The Globe reported in November that Gov. Gavin Newsom was missing in action for nearly two weeks following his October 27th COVID booster shot. We sent his press office a request for his public schedule. We did not receive a reply until Thursday November 18th, 10 days later, denying our request.

The Governor’s legal unit sent the Globe this message:

“We anticipate that the Governor’s calendar for November 2021 will be available in January 2022. This timeline provides us an opportunity to review the calendar, to redact information that is exempt from disclosure under the Public Records Act (as discussed below), and to standardize our production dates for all requesters seeking copies of the Governor’s calendar.” (emphasis ours)

Yet as we noted:

“We did not specify what type of ‘calendar’ device Gov. Newsom uses to keep his schedule; we just asked for his ‘public schedule.’”

“The governor’s office didn’t respond to a question about why that information wasn’t initially shared,” CalMatters reported. “But one possible reason could be that Montana is among the 22 states to which California has banned state-funded and state-sponsored travel, citing policies it deems discriminatory to LGBTQ+ people. Montana is also one of the states Newsom’s office has called out for restricting abortion access.”

December 3, 2021, the Globe sent the California Highway Patrol a public records request asking for “The number of California Highway Patrol security detail personnel assigned to Gov. Gavin Newsom, the First Partner and his family, on the governor’s recent vacation to Mexico, November 22, 2021 through November 28, 2021 as well as the number of vehicles assigned on the trip.”

We did not ask for names or any personal information – just for the number of security detail personnel assigned to Gov. Newsom.

The Public Records Unit extended its 10-day response timeframe by an additional 14 days.

And then in late December, we received this response, denying our request:

“The PRU has determined the Department possesses records responsive to your request; however, these records are being withheld pursuant to Government Code section 6254 (f). Please direct any media-related questions to the Office of Community Outreach and Media Relations.”

Government Code section 6254 (f) says: this chapter does not require the disclosure of any of the following records:

Again, we did not ask for names or any personal information – just for the number of security detail personnel assigned to Gov. Newsom.

Gov. Newsom’s administration may be the least transparent of any of his predecessors, and he may be the most imperious. Newsom has vacationed many times while he refuses to relinquish his emergency powers. He dined at the exclusive French Laundry on Napa. He’s been to the Super Bowl playoffs maskless. He traveled to Cabo and Costa Rica while Californians were still being held to mask-wearing, and school kids were masked all day in class.

He and his administration certainly are much more cavalier with information that should be public.

11 thoughts on “Gov. Newsom Vacationing in Montana, One of CA’s 22 States Banned from State Travel”